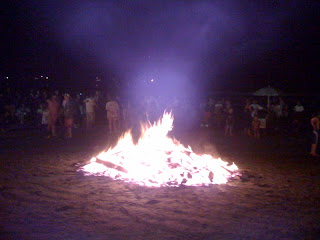 Posted by Bryan Mcpherson at 5:20 PM No comments:

Back in Maine for a few days. Eating large quantities of good food,
swimming in the ocean, going on adventures, and playing music. Good
times.
Posted by Bryan Mcpherson at 4:59 PM 1 comment:

There is a older man in a Red Sox jersey next to me talking to another guy.

"I'm old school South Boston. There are no values today. Huh? No, not property values. Moral values. No moral values. Yeah. Yuppies? Yuppies took over Southie. They ruin everything. They destroy everything".
Are you a yuppie?
"Me?" I say
"No, I grew up in Dorchester. That makes me not a yuppie."
"What part?" he says
"St. Marks. Near Fields Corner."
He says OK.
I say OK.

Dodged that bullet. Had I been a yuppie I may not have made it out of there alive.

Bryan McPherson
Women in Docs
Posted by Bryan Mcpherson at 12:42 AM 1 comment:

There goes the neighborhood 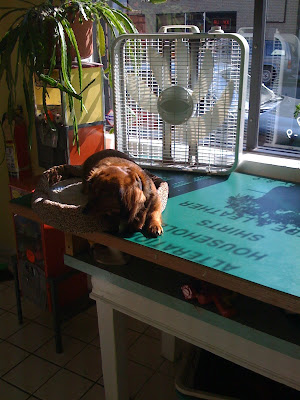 People ask me what I think of the election?
I say that I try not to.

Does anyone really think about the election?
Or does everyone sort of just wait for whats being served and then choose, like on a menu.
eeney miney fucking moe.

and they are all sleeping together.

I will not pretend to have any faith in politics.

I will vote for this dog. He's a nice dog. I've met him a few times. I know him personally and I trust him.
Posted by Bryan Mcpherson at 10:27 AM No comments: 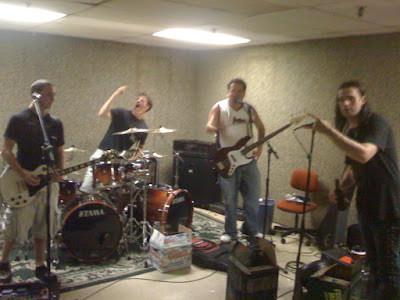 Its today.
My eyes are tired and I have a mean caffeine hangover from the 10 diet cola's and 1 redbull I drank last night.
Bang bang bang. The floor is shaking and these earplugs don't absorb the heavy bass that's booming from my walls.
I'm sick of shitty apartments and shitty jobs.
My landlord is renovating her house on the weekends.
She leaves on the weekend so she doesn't have to listen to this shit.
I got home from Maine at 330 am and the banging stared at 9. Its pretty disruptive of sleep! Other than that I like this apartment. Its small, but its boat living baby. I live on a boat. Its a boat built on the ground a quarter mile from the ocean and attached to a house. Ok its a small apartment but I pretend its a boat.

Had a show in Portland Maine last night at Geno's Rock Club.
I'm told that the club is in the old time red-light district, although there are no more strip clubs or hookers. Portland's got a cool scene as far as the strip there on Congress Street goes. They have an art gallery and live music can be heard outside on the street in the distance.
Since I was playing in Maine I left in the morning and headed up to Ogunquit to visit my friends Ben, his fiance` Caitlan and his mom Isabel. I have cool interesting friends.
Ben and his mom are both talented photographers and Caitlan is an incredible painter.
Bens mom Isabela is also the towns leading enviornmentalist and has done alot of work in those parts to save some creatures and some beauty. They live in this big barn. It was actually built like a barn, but was never used as barn. Its also built right in front of their old house, which is now falling apart and covered by brush, its gotta be cool to look in your backyard and see a house covered by brush. In the middle of the floor up to the watch tower is a space that opens up for ventalation. It also looks really cool. The house is covered in Art. Its everywhere. Its also full of instruments and other random neat things. They should charge admission to go in there and poke around. So I made it there around 1, we had some lunch and headed to the beach, which is conveniantly located about 60 seconds away by foot. Its pretty crowded there, but a nice beach. Walked around, got some sun had me some soft served. Saw a lifeguard rescue 2 people who were getting swept away by a mean current, and then headed back to the crib. Ben cooked up his special chicken we bought some fresh corn and had a little feast in the yard under some heavy tree coverage. With the bottle of wine on the table, cigarette smoke and general bohemian atmosphere I fealt like I was in France. I have never been to France, but its how I imagine it. Grateful for the visit with my friends and with a full belly I jumped in the car and took off for Portland.
Portland was great because every time I play there it is 5 degrees. Its nice to go up there in the summer when everyone isn't frozen or locked inside.
I was on the bill with Lost Cause Desperado's and All Night Chemist. I enjoyed both of their sets.
I played with Penny on drums and I have to say we kicked ass. Was a great set, great sound and a cool crowd. We had some dancing girls cutting up the rug to the last 3 songs(Angel in The Snow,Don't Terrorize Me and Black Man). Its pretty cool seeing people dance to those songs! I hung around for the night and headed out around 1230, stopped for a greassy burger down by the water and hit the road. I dragged my tired ass into bed at around 4 and here I am. Its bang bang bang banging on the floor.
Next weekend MY APARTMENT is getting renovated and I'm going back up to maine for a couple of days.
Word.
Posted by Bryan Mcpherson at 10:33 AM 3 comments:

Holes in my shoes again.

I have holes in my soles.
Lets hope for sunny days.
Posted by Bryan Mcpherson at 3:32 PM No comments:

Ok, so I'm blogging from my shnazzy phone. What is the world coming to?

Harvard square.
I'm on my bike riding down mass ave with the flow of traffic. Suddenly, directly on front of me is a maniacal young girl wobbling on her bike, against the flow of traffic, listening to headphones and headed straight for me. Listening to headphones on a bike seems like a good idea, until your squished underneath a Mac truck because you didn't hear it coming. Also, riding in the street against the flow of traffic on mass ave is the equivalent of driving on the wrong side of the road. Combine that with the headphones and its like driving on the wrong side of the road blindfolded.
Luckily I passed by and escaped uninjured. I don't know what happened to the girl.

Harvard square.
I'm in my fav Vietnamese harvard square restaurant
Rocking some Pho at the bar when someone comes in and orders spring rolls to go. "do you want them fried or not fried?" the bartender says
"fried" the person replied.
5 minutes go by.
The person blurts out, "actually, can I get those not fried?"
The bartender rolls her eyes. We are all lucky she didn't bring a machine gun to work today.

Harvard square
I'm in the grass in the park at Grendel's, laying down taking a break in between my hot yoga and my day job. A confused European approaches me. He says "I'm looking for my car. I parked it I'm front of a house with a flag in front of it. The flag has stars on it. Do you know where that is?"
I turn my head like a dog and say"hmm, do you know the street name?
He says no.
I say,"do you know any shops it was near?"
He says no.
I say, I don't know. Good luck.
He says thank you and walks on.
He was very polite

This all really happened.
Posted by Bryan Mcpherson at 10:38 AM No comments:

So i was heavily advised to go to this all ages show lat night in JP to see Defiance Ohio. Ok, this band kicked ass. I bought 2 of their cd's for 12 bucks. Deal.
The energy in the room was intense and everyone there was singing along. There were a few announcements that the floor might collapse from the stomping and jumping and dancing and it really did start to feel like it may collapse. Anyways, awesome show. Check em out.
Its really really really cool to go to an all ages show. Especially to see a band like this. It kind of reminded me of the first time I saw Avail. Brought me back to the days when all I went to were all ages shows and people weren't all old and jaded. No offense old and jaded people.
Speaking of old and jaded.
I got home and watched Hysteria, the Def Leopard Story. Don't ask me why.

I wake up. I'm tired. I'm foggy.
I go get coffee at the coffee place.
I'm in line.
Who is in front of me?
Matty V. Boston firefighter.
Matty V says, "Guess who just walked in, Bryan McPherson OFD"
I go "yup. Whats up Matty?" and rub my eyes
He's on his cell phone talking to someone.
He goes "I'm talking to Mike Mcolgan"
Mike Mcolgan of The Street Dogs and original singer of The Dropkick Murphy's. (He's from Dorchester. I'm from Dorchester.)
They are friends.
Now, I grew up and came of age with that early Dropkicks shit. The first 2 records and the seven inches etc. . .I am also a fan of The Street Dogs.
So I'm like, "No shit"
Then he puts me on the phone with him!
So I start bumbling and mumbling about how I like the street dogs and whatever and we trade small talk, etc. . He's telling me about the shows they are doing with The Mighty Mighty Bosstones, NOFX, Bouncing Souls. Then The girls at the coffee shop start demanding my order and I just stammer and give the phone back to Matty and get my coffee and start to wake up. Then I feel like an idiot because I got all star struck. But then again, its not everyday you get to talk to one of your heroes while half asleep, in line at a coffee shop, on a cell phone in Dorchester.
Posted by Bryan Mcpherson at 1:02 PM 2 comments: