Even though they have been together for almost 20 years they had never officially tied the knot and gotten married. After a random, middle of the night, brain hemorrhage suffered by Pete last month they started to talk about getting married. They had scheduled their impromptu wedding for this Thursday, but were interrupted by yet another major health complication when Pete was rushed to the hospital yet again in the middle of the night in an ambulance and told he had major blood clots in his heart and lungs. Words like mortality and death were tossed around. Survival rates clung too. Faith forgotten and remembered. Tears were shed. Love was exchanged. Hands were shook. Some phone calls were made by a family friend(Dee we are all grateful to you). Right before his open heart surgery we got a Reverend/justice of the peace up to his room to have a wedding. We closed the curtain to his bed and had an outlaw wedding. Perhaps one of the most beautiful things I have witnessed in my life. 10's of thousands of dollars and months of planning could not match this sort of ceremony. Before being carted off to surgery Pete said he was very happy. He made it through the surgery. They took a very large blood clot out of his heart and he is the talk of the hospital due to the large size of it. Mom and Pete are now officially hitched in the eyes of the state, god, man,woman, dogs, cats etc.. The joke is next month when Pete's nervous system fails or his arms fall off or something, they will be getting a divorce. I don't think so though. This is 20 years in the making. Congratulations Mom and Pete! 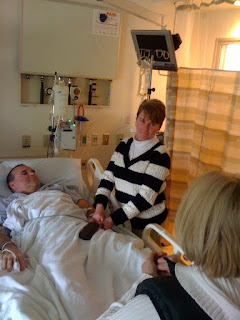 Posted by Bryan Mcpherson at 7:18 PM

Beautiful post, brother. All my best to the happy couple.

That is wonderful, and one of the most beautiful events one can ever witness. I am so happy for them both. It's true that people put too much time and money into these things now. Marriage is truly just about you and your significant other - the one that you truly love - uniting together and making a promise that will last for eternity. Congrats to your family Bryan! Happy Holidays! Best Wishes to Pete's full recovery!

Bryan,
You wrote a beautiful chronicle of love and marriage. What love! What a marriage! This one is surely made in both heaven and and on earth. Please send Pete and your Mom much love and many congratulations from me and the Mulvaney men.

Thanks everybody, I will pass the congratulations on to the happy couple.

Bryan -
I told my brother recently that Sharon is truly an Angel - after all where would he be without her? I am glad that they took this step forward and glad you were there to witness it and that you were able to capture a moment or two to share with us all. I am thankful that Pete survived both these tremendous health challenges and hope the two of them get to grow old together! Thank you and God Bless! ~~Barb~~